Are you flaunting’ socially questionable’ actions on social media?

Hold your horses, before impulsively posting your views on social media platforms!

Today, everyone is on social media! It’s become a norm to be socially active on these platforms. A lot many companies sweep their prospective candidate’s social media posts and feeds. Social media has made it a cakewalk for employers to map your interests, activities and affiliations. The manager hiring you doesn’t need to spend time with you to figure you out, they just need to spend time on your social media handles and bingo and they can picture your personality.

So, for a potential candidate seeking employment, social media provides an opportunity to look up the company and vice versa.

Social media today is literally all over the globe. Recently LinkedIn crossed the 10 million users mark in India and Facebook tops the chart with around 34.6 million active registered users in India. Twitter, though arrived late on the scene, will soon touch 16 million Indian users. These statistics clearly reflect why every company today has its presence on social media. LinkedIn too is slowly catching up.

I would like to share with you a personal experience. A fellow classmate of mine 10 years ago, while we were awaiting our placements, was offered a PPO (Pre placement offer) with the company he interned with. He was hailed a hero in the class! Rightly so, as he was the only one who was given a PPO. Those days Facebook hadn’t really caught up, Orkut was ‘the’ thing then! He had liked a page on Orkut which badmouthed the company. The title of the group was – ‘We Hate XXX’. He also had posted a comment there, putting forth a few things he didn’t like about the company. Within a few days, he received a letter from the companies HR stating, they withdraw the PPO extended to him. Reason cited was, he was inciting hate towards the company and badmouthing the company in public. They had enclosed a print screen shot of his comment and proof that he was a member of that community on Orkut. Even 10 years back, companies would scan social media platforms to keep a track of their employees/ prospective employees. Organizations are right on their part, why would they want to absorb a candidate who at the outset is disengaged and disloyal to the organization. I learnt a lesson of not ever badmouthing my organization on social platforms, early in my career.

While many in my class objected to this ‘unfair decision’, organizations are justified on their part to ascertain a candidate’s fitment for a position determined by his social media posts and pictures. The reality is that social networking handles of candidates talk a lot about their personality, interests and disposition in general. For example: – Using vulgar language, bad mouthing on social media could suggest behavioral issues such as immaturity and inability to resolve conflicts amicably. Similarly, endorsing grapevine about the private affairs of other people is a sign of spreading rumors and gossip that could impact their ability to function in a role that demands confidentiality.

In a recent case, a company hired a candidate after doing a professional background check, but missed out on a social media scan. Later, the employee displayed murderous tendencies by attempting to harm his girlfriend with a knife, following a domestic spat. When the company approached the police for help, they were questioned about whether a background check was conducted. It was then found, when his social media activity was made public, that he had a tendency towards violence. They found violent content on his social media platform.

By extending the verification to include social media, it can aid in gauging any extremist behavior and help avoid problematic incidents. It also serves as an indicator of a candidate’s work ethics and temperament.

Let’s look at few parameters which a company might use to undertake a social media check:

• Companies might easily trace employees who badmouthed their previous employers, based on their comments or status updates.

• Excessive twittering or round the clock activity on social media, might point out an employee’s lack of dedication towards his/her job during office hours.

• Comments containing racial slurs and other offensive language. Although it’s a personal profile, conclusions can be drawn on how a particular candidate thinks and reflect his/her sensitivity.

Social networking sites are here to stay and hence it’s necessary for both the employers and employees to ensure that they maintain certain ethical guidelines. We don’t suggest you to be weary of expressing your personal, political, social views. However, ensure, they don’t work against you in the future. It would be prudent to weigh carefully what you post; after all it is a public platform. As employers are increasingly viewing social media pages to evaluate if candidates are worthy of hiring and culturally fit in, it is advised to be careful about what you post online.
Brace yourself for social media scans! 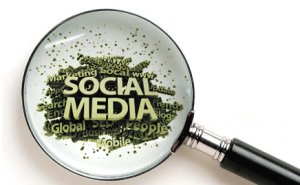