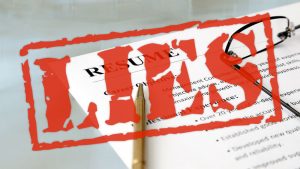 If you have lied on your resume, you have a lot of company in that arena. A CareerBuilder survey reports that more than half of employers (75%) have caught a lie on an applicant’s resume. Think about it, more than half the people you know might be guilty of falsifying details on their CV.

We all, at one time or another have been tempted to lie on our resumes. We may convince ourselves that these are little white lies, not deceitful or with malicious intentions. Irrespective of how harmless we perceive a lie to be, a lie remains a lie.

Desperate times often call for desperate measures and in a brutal employment market; several job seekers may be tempted to falsify their work or education history in order to make themselves more sellable to potential employers.

Not only me but experts also agree that lying on your resume is a bad scheme for many reasons, not least of which is that you’re likely to get caught. From the initial background check to the multiple meetings that lead up to the interview process, there are just too many barricades to reveal that you’ve been less than truthful.

Now if you get lucky, make it through and get hired, you’re not off the hook: times gone by are full of examples of high-level executives who have lost their positions and tarnished their reputations after being caught embellishing their CV.

Most of you reading this already know all this for a fact. Many of you may have already stretched the truth on your resume and now you’re trying to cope with the possible consequences. Maybe you just got a call to schedule an interview for your desired job. However and this is a big ‘however’ you lied on your resume when you applied. We shall touch upon the possible remedies later through the article. Let’s first see what the most common lies in resumes now-a-days are.

A CareerBuilder survey reported on what job seekers tried to get away with most often:
• Embellished skill sets: 62%
• Embellished responsibilities: 54%
• Dates of employment: 39%
• Job titles: 31%
• Academic degrees: 28%

Having stated this fact, I would like to highlight that it’s foolish to go through the trouble of applying for a job and going on job interviews, just to lose the offer by making up a degree or a past employer to try and make your resume look impressive. Lying to a prospective employer is one of the worst decisions you can ever make and it’s something that will eventually come back to bite you.

A little fibbing on your resume might not seem like a big deal when you’re applying for a low-ranking position, but you never know where your professional career will end up. These little lies can come back to threaten you career, as was the case of Yahoo’s CEO Scott Thompson’s fake resume.

Now let us look at the options in hand in case you have fibbed in your resume:-

Option 1. Update Your Resume! Unfortunately, there are no guarantees and no sure way to keep yourself in consideration for the job, let alone get an offer, but you could update your resume – fix the dates, edit some of the wording and tell the interviewer that you noticed some errors on your resume and have a revised copy.

Option 2. Come Clean and Tell the Truth. This is an extremely challenging option to exercise which most of us would never do. However, it’s worth a try! Try telling the hiring manager the truth, which will probably knock you out of consideration. Nevertheless, at least you won’t be hired based on a lie and won’t have to worry about someone finding out. Moreover it will leave you with a clean consciousness. Furthermore, if I were the hiring manager, I would still consider your application, as telling the truth upfront is an enormous strength, possessed by a select few.

Option 3. Do Nothing. The third option is to do nothing and hope you don’t get caught. The danger in that is if they have you fill out a job application, you need to be honest, because you can get fired at any point in the future if they find out and/or if they check your references and verify dates of employment. This is something I would never recommend, no matter what the circumstances.

Option 4. Withdraw Your Application. Another alternative is to withdraw your job application. You don’t have to give a reason why. You can simply thank the employer for the invitation and say you’re not interested in the position at this time. You have obviously lost your chance of getting the job, but this is the safest option if you don’t want to explain or to have to deal with the consequences of lying.

Having laid out all the options for you, I would urge all the applicants and candidates to rectify the fibs they’ve made on their resumes or to come out clean to the interviewer. It’s never too late!

Consider the big consequences of the little lies you’ve cooked up. It’s time to make amends!

You jeopardize your future when you lie about your past.