There was a Mr. X. He was going through a road. On the side walk there was a hole.

Mr. X was unaware of the hole and he fell into it. He was not looking and walking, he didn’t expect any such thing to happen. We can say it was not his mistake. It took a lot of time to come out of the hole.

He went and spoke about the hole with Mr. Y and Mr. Z.

Next day, Mr. Y was walking the same road. He knew about the hole. But he ignored the thought and went ahead without looking. He fell into the hole. It was his mistake. Obviously, it took a lot of time to come out of the hole.

The very next day Mr. Z had to take the same road. He knew about the hole and he even saw it. But he in a hurry for he was getting late for his meeting and assumed that he won’t fall in it. He took another step ahead, and he fell. It took a lot of time to come out of the hole. Yes, he was very late for his meeting. 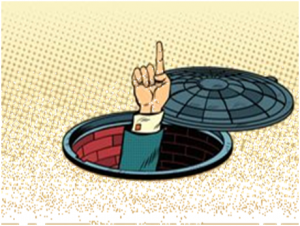 He went and spoke about it with his friends, Mr. X and Mr. Y.

Next day Mr. X had to take the same road, he was extremely careful. He walked around the road. He reached his destination on time.

Putting the story in today scenario, this is what happens to us – Some Mr. X, falsifies his information in his resume, he gets that job. Post background verification, he ends up losing the same. He takes a lot of time to find another job.

He shared his horrific experience with his friends too.

They took the matter lightly and they beautify their resumes too, to get a job faster and in the best organizations. No suspense, post background verification, they were shown doors.

1 out of 6 resumes have some or the other lie. Are we all going to fall in the hole and go through a really hard time getting out of it? Or are we going to take a better road, without any fallout? It may take more time to get a job with your credentials, but at least it won’t be short lived.

Let’s not become Mr Z, who knows and sees the danger and yet assumes that he, is smart enough to escape the same. With the advent of a new year, hoping that we will have less of fallouts and more of truthful resumes on the job tables, after all honesty is still the best policy. What say!