Once a renowned Pundit, who was well versed in many languages, visited Akbar’s court. He challenged everybody in the court to guess his mother tongue and if anyone could guess it right, he will leave else the king will have to give him a box full of gold and jewels.

The courtiers started guessing but no one could succeed. At the end, Birbal spoke and said to the pundit, “Pundit ji, you must be tired. Please be our guest for the night and take rest. Tomorrow morning in the court, we will tell your mother tongue.”

The pundit accepted the offer happily and was sure he will leave the kingdom with the prize.

During the night, when the pundit was fast asleep, Birbal sneaked into his room. Very softly he went near him and started tickling his ear with dry grass.The Pundit brushed off the grass with his hand. Birbal repeated this a few times. Finally the pundit woke up, Birbal hid behind the bed, the Pundit shouted loudly, “Kē āmākē birakta karachē!” (Who is troubling me?) He couldn’t see anyone, he went back to sleep. Birbal quietly went out of the room.

Next morning, the overconfident pundit was waiting for his prize when Birbal came ahead and said, “Jahan panna, with your permission, can I tell the mother tongue of this learned man?”

Akbar was also very curious and was waiting for the answer. Birbal looked at the pundit and said, “Pundit ji, we guessed your mother tongue as Bengali yesterday, but you declined the claim. You lied to us. Bengali is your mother tongue.” Pundit was ashamed and heartbroken. He walked out of the court without even a penny.

Akbar enquired how Birbal found the truth. Birbal spoke words of wisdom,” Jahan Pannah, a man in distress, will always speak/do what is there in his subconscious mind.” 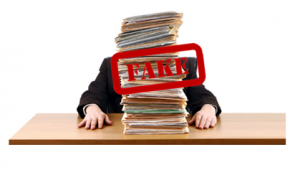 Wade Jordan was jailed for three years: He claimed a fake degree in his resume. He got a good position in the organization in the HR department. He swindled almost £50,000 from it in fraudulent expenses claims, like for various trainings he attended (which he didn’t) and hotel stay expenses, etc.

Dennis O’ Riordan was dismissed from his top city firm: Dennis claimed he was a Harvard pass out, because he wanted to bag a high position job and didn’t want to start from the junior level.

TOI article unveils the UP B.Ed. degree scam: Almost 2000 primary teachers have fake degrees. More than 30 colleges are fake and are helping in this process. Fake colleges are just for making money; they do not create an efficient teacher. They are just giving degrees to the untrained teachers.

The above examples are the most undesirable candidates for any organization. But the story is not this small, the degree deceit are on an all time high, and there are many who do not shy away in making silly mistakes like replacing B with a M. At least with just one letter change, they may bag a good job.

To all those, who lie on their resume, stop. Stop it now.

Background verification is here. One may get a lesser salary in accordance to the degree but at least not a pink slip!

To all the organizations out there who consider background verification as an added cost to the organization. Well, you are getting into a grave trouble. If a candidate can forge his own marks/degree for his benefit and he is successful in doing so, then it is just a small start for him. Always remember, in distress you do/speak what is there in your subconscious mind! Do you really want to risk it?

Education verification is the answer to all the degree deceits. Be wise and do cost cutting on things of lesser importance. Background verification is an appropriate investment for your organization’s safer future. Be safe and keep growing!